Atheists Respond With Hate Towards Ken Ham: Why Does The Heathen Rage?

Dr. Ken Ham, creator of the Creation Museum is going to debate Bill Nye the Science Guy on Tuesday, Feb 4th. So instead of listening to the debate and walking away if they don't agree, they spew hatred, vileness, and obscenity after obscenity towards Ken Ham or anyone who may happen to agree or even be sympathetic to his world view. Does this sound humanitarian to you? Why would they even waste one iota of their ever decreasing time to even give a response at all? "Eat and drink, for tomorrow we die."
Well here is Ken Ham's response to the haters...

Obama: This Is a "Year Of Action"

America, meet your dictator. Remember that Stalin, Lenin, Pol Pot, Saddam, and Hitler all had great success with their "years of action" as well.
Posted by Aaroncoal No comments:

The Dunk Heard 'Round The World

Wichita State University's Tekele Cotton (6'2'') dunks over Illinois State's John Jones (6'8'') with what looked like the moon physics cheat turned on. Check it out..

The Dumbest Generation... So Far 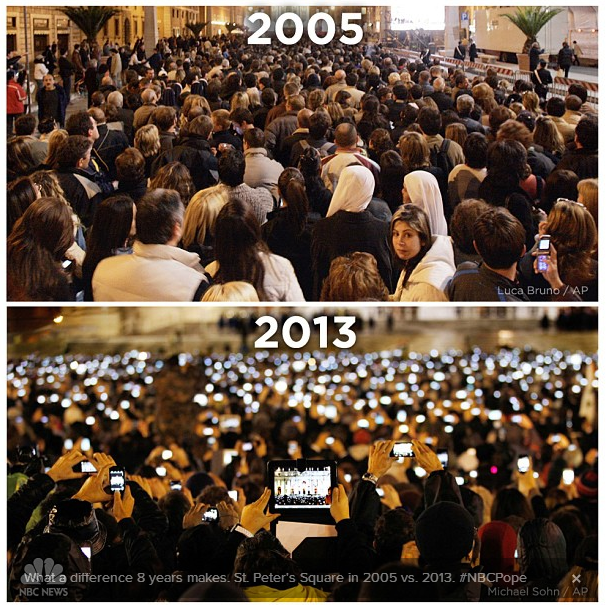 Is the current generation really the dumbest? Let me Wikipedia that and find out.
We have raised a generation of helpless, entitled, overgrown, live-with-your-parents-until-age-40, douche bags. We did it on purpose because we were lazy. Our grandpa gave his blood and guts in glory on the battlefield, while our grandma stayed home and riveted planes and then went home and scrubbed her knuckles raw on a wash board.
Meanwhile we spend our time crying because we didn't get a close parking space at the Wal-Mart and then we text about and blog about it to our even more pathetic friends who are at home complaining to their professor about the amount of homework when they just want to go out to the club tonight.

You can pinpoint where it started in America. The wheels were set in motion before World War II. The entitlement trap was set by FDR and his "New Deal". This New Deal was a massive failure. But worse than that, it set the wheels in motion for the serpent to invade Washington DC. The serpent was the liberal democrat, who to this day has hooked so many with the lie of "free lunch". Failure after failure after failure has neither ended the constant lying, nor has it dissuaded the populace who continue to believe it. Meanwhile they turn the temperature of the water in the pot ever so slowly so that even the "intellectuals" deny they are drowning in boiling water.

So now we come to what we have today.. government fed zombies.

And how does that relate to the photo above?

It's just part two of the equation. The computer age put the final nail in the coffin. We do not have the ability to retain information anymore. The little device that fits in our pocket is smarter than we are, and it has the answer. It's like if your dad did your homework for you every night, and now the person who could potentially hire you just asked you what Photosynthesis means. "Uh, can I phone a dad?"

We ARE the dumbest generation. Dumber than the last, not quite as dumb as the one growing up now. We have no business even questioning why our schools are failing. Our schools are failing because of a million reasons.. The glaring one would be that their teacher is from the dumbest generation, it's the blind leading the blind. Then they get home to lazy, stare-at-our-phone-all-night parents, who sometimes don't even know HOW to do their kid's homework, and they look to us for help, and we either don't know, or we practically do it for them, or we just look it up on our "Smart Phone".
We are failing our kids. Our parent's failed us, their parent's failed them.

There are exceptions. (Hi Mom, Hi Dad! Love You!) But I have to admit that I am part of the problem. I am guilty of lazy parenting. I am slow to discipline when I shouldn't be.

So how does the cycle end?

All I can say is, May God have mercy on our souls.
Posted by Aaroncoal 2 comments:

Why The Left Hates The Jews

Richard L. Cravatts, Ph.D. On campuses today Israel is regularly, though falsely, condemned for being created “illegally” – through the “theft” of Palestinian lands and property – and thus has no “right to exist.” The government is accused of a “brutal,” illegal “occupation” of Palestinian lands, of being a “colonial settler state,” a Zionist “regime,” a land-hungry nation building an “apartheid wall” as a further land grab, a usurper of property that was lived on and owned by a Palestinian “people” “from time immemorial.” Zionism is regularly equated with Nazism, and the perceived offenses of Israel’s government and military are likened to Nazi crimes against humanity; the notion is that Israel is creating a “Holocaust in the Holy Land” through “ethnic cleansing,” an ongoing “genocide” of Arabs, and the elimination of the rights of an innocent, “indigenous people” who merely seek self-determination and the peaceful creation of a Palestinian homeland. It was not always thus. Prior to the 1967 war, Israel still garnered sympathy and admiration from the non-Muslim world that saw its pluck and ability to bring a vibrant democracy to the desert as being enviable and praiseworthy. Still weak and living in a perilous realm surrounded by hostile, totalitarian regimes, Israel could count on the liberal Left for support and an ideological nod of approval. But thanks to its ascension to a status as a militarily and economically powerful nation, coupled with the successful propaganda war waged against it by its Arab neighbors and jihadist foes, many of Israel’s sympathizers began to lose their affection for their former Middle East favorite and instead began conflating their negative views of the United States, capitalism, and imperialism (defined as “occupation” in the case of Israel) with the Jewish state. * * * * * Why the animus against democratic Israel in academe as the nation defends itself from an unending campaign of aggression from Arab countries? One trend that has permeated the university and which has had a subsequent influence on the way Israel is perceived was the coming of two watchwords of higher education: diversity and multiculturalism. The language of multiculturalism on campuses is sprinkled with the linguistics of oppression, coaxing students in newly-identified victim groups to see themselves as deserving of protection and special political, racial, and cultural recognition. The obsessive reverence for multiculturalism on the part of universities has also meant that liberal faculty members have come to embrace attitudes that give equal value to very different cultures and nations, a factor that has led – as it did before when the Left embraced the ideology and overlooked the barbaric excesses of Communism – to a dangerous acceptance of radical Islam as equal to and compatible with the culture, values, and ethics of Western democracies. In United in Hate: The Left’s Romance With Tyranny and Terror, his examination of the traditional impulse of the Left to align itself with political movements with values foreign and antithetical to those of most Americans, Jamie Glazov saw a direct causal link between an acceptance of defective ideologies by the Left as part of the process by which it rejects democratic Western ideals and a slavish fondness for what he characterizes as the “Left’s sacred cow of multiculturalism.”

Famous Atheist Uses Diversion Tactics To Avoid Answering One Simple Question; Gets Owned In The Process

Is it IMPOSSIBLE for God to exist? Yes or No?

Sorry for my sparse, un-inspired posts followed by absence in the world of blogs no one reads. So I decided to get my old friend back up and running to start 2014 off right. I want to build back some readership and have a voice.
What you can expect?

* Alienation of entire sections of people in society

*  Grammar mistakes resulting in incomplete sentences, and also.
Posted by Aaroncoal No comments: