* There is a God and He is sovereign and in control and He wants us to abandon this world for Him because He loves us.

* Modern liberalism is a mental disorder.

* Ronald Reagan is the greatest president of the 21st century.

* The law of non-contradiction apples to religion and science too. Exclusive claims cannot be true and not true at the same time.

* Listen to Ravi Zacharias(Click Here). I Promise it will change your life.

* The fad of tattoos is annoying. You do realize that 65% of the population now has some Chinese letter on the small of their back.

* I like Walmart because as you know, the savings never stop.

* As a rule in Kansas, generally when you see a car parked on the lawn in front of someone's mobile home trailer, you can bet that one of the car windows is actually a trash bag held on with duct tape.

* If I ever start a bluegrass band the name of it would be The Cedar Hill Boys.

* There is no greater feeling in this world than knowing that this world and this life is not how the story ends.

* Turn your eyes upon Jesus, look full in His wonderful face; and the things of earth will grow strangely dim, in the light of His glory and grace!

* Captain Crunch cereal pulverizes the roof of your mouth.

* SNL should go off the air. It's stupid.

* Legally all commercials should be limited to 30 seconds.

* The greatest invention of the 21st century is a 3-way tie between The Clapper, Spray Easy Cheese, and The Flowbee.

* Obama is scared to do the right thing because he has money tied up in doing the wrong thing.. just ask his donors.

* Obama WILL go down along with Jimmy Carter as one of the worst presidents of the modern era.

* May God have mercy on our souls.

* There is some kind of state law that all retail places must play Christmas music from Thanksgiving through Christmas. It's psychological.. it's supposed to make you want to buy more by getting you in the Christmas spirit. But an unintended consequence is that it makes the employees want to climb up on a high rise building with a deer rifle. Collateral damage I guess.

* I miss the days when I got Hungry Hungry Hippos for Christmas and all was right with the world. These days you have to get kids laptops.
Posted by Aaroncoal No comments:

Star Trek And An Apparently Elderly Smokey The Bear 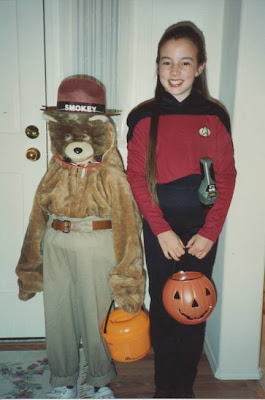 Society is sliding hopelessly down hill. It was happening long before Barack Husein Obama took office. He is only a product of the slide. Who can possibly pinpoint when we took a turn for the worst? Well that's not entirely true.. shortly after God created Adam and Eve we all started slowly dying before we were even born.

But skip that and think about our current state. It's pretty much a loveless society. There is real love and goodness out there but these days it's about the 8th story on the newscast every night and half the time the person who did the good deed is on the news to tell the world about it. Real good deeds go untold. Neighbor helping neighbor really only takes place these days in very small towns, and very small towns don't make news.

The reason? It has nothing to do with the evil of socialism. Socialism isn't inherently evil. Socialism simply neglects to factor in a fundamental truth which by nature renders every "ism" dead on arrival. And that is human nature. Why do you think that communism failed so miserably? It's because the founders of it were sinister in their attempt. No matter how hard they wanted to, they couldn't help but cling on to their stuff. We all LOVE stuff. And government forcing us to spread our stuff around doesn't somehow magically cause us to stop liking our own stuff.

We love our stuff. Barack Husein Obama, Mao Zedong, Linen, Stalin, and even Karl Marx all loved their stuff. But they also love controlling the flow of stuff.. Because if you control the flow of stuff you can cause people to be forced to rely on you to have any stuff whatsoever.. and that is true power.

So my rambling point is that society is hopelessly sliding down hill because we all love stuff.. and a select few of us loves stuff AND the power to control stuff.. and so we sit and wait for America, the world's greatest experiment in freedom, to die the slow death and fade into control and mediocrity. We cannot stop it.. it's too late.. We can only delay it.
Posted by Aaroncoal No comments:

Does God Will For You To Have Health?

Best In Show, and Best In All Our Hearts... 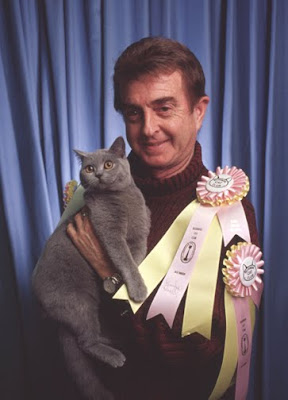 That cat is begging for someone to help!
Posted by Aaroncoal 1 comment:

A Couple Of Observations...

* Some left wingers have stated that cops shouldn't be allowed to use tasers to subdue people. Some have said it is cruel and unusual, and also a few people have been killed by them. Do you realize if the left were allowed to take over and be in charge of this country that we would be overrun with misfits and criminals? I think every cop should have a taser and use it often.. If the taser kills someone then we dust ourselves off and move on. It clears up room in the prisons... so Bonus! And in the meantime on the show COPS we get to see the big muscle guy who thinks he's so bad flop around like a fish on the ground and then cry like a little girl. It's fantastic entertainment!

* Obama bowed in a sign of submission before the emperor of Japan. That must have been the thrill of his life. We all know how cool it meet someone who is a superior. Congrats Mr. President. Please note that the emperor did not reciprocate the gesture.. in fact rumor is the emperor leaned over after Obama stood back up and whispered "Wow, that just made you look pretty silly... nice one!"
George W. Bush never bowed.. in fact in front of the same emperor, rumor has it, he shook his hand and said "Hey just gotta say thanks for making the GameBoy.. keep cranking those things out!"
Posted by Aaroncoal No comments:

I Miss The Pre-PETA Days... 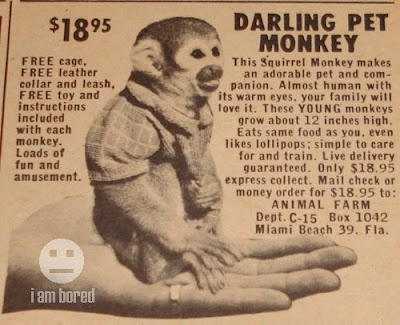 I have looked at the bill, examined it, and here are some of what we can expect..

* All prescription medications can now only available for pick up at a centrally located state-run pharmacy in Petersburg, Ohio. There is only one pick up window but do not worry because there are plans to add a drive up window by 2016.

* Obese Americans can apply for special consideration that they are technically two people and should be given a tax break as such.

* Medical doctors, now being owned by the state, must attend a mandatory timeshare seminar once a year.

* There will indeed be a death panel. Some of the members of the panel will include Charles Rangel, Nancy Pelosi, and Barbra Streisand.

* Barbra Streisand has opted to change the lyrics of her song "People" to better reflect her new role on the death panel. Some of the new lyrics include.. "Grandmas...grandmas who need chemo.. will be some of the unluckiest people in the world.."

* McDonald's, Burger King, and Wendy's are corporations that make your children want to eat their food by making it taste good. They are to be shut down for the good of the people. Mayor McCheese will be given a new state position as Czar McSalad.

* Canadians who previously came down here for superior health care are out of luck, but according to the bill they are welcome to stay and have their health treatments decided by our new death panel.

* Why, just fifty years ago, they thought a disease like your daughter's was caused by demonic possession or witchcraft. But nowadays we know that Isabelle is suffering from an imbalance of bodily humors, perhaps caused by a toad or a small dwarf living in her stomach.

Email ThisBlogThis!Share to TwitterShare to FacebookShare to Pinterest
Labels: Satire

These Two Win The Halloween Costume Contest In My Opinion... 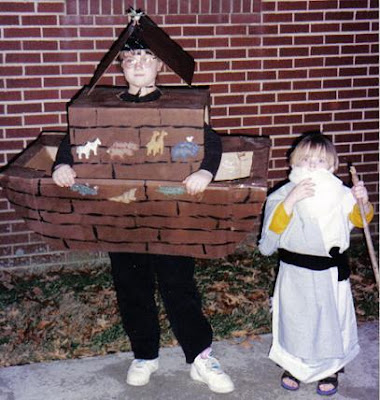 A Couple Of Observations... * Jay Leno is kind of making me mad. He left the Tonight Show and handed the reins over to Conan. And then he pulls a Brett Favre and agrees to host a show before Conan that basically puts Conan back in the same situation he was in. The Tonight Show is the coveted spot and Leno seems to have trouble getting out of the way. Well now, Leno says if asked he would return to the Tonight Show. I don't think he realizes how unfunny his show was. The ratings were from elderly people that couldn't work their remote. Conan O'Brien is a great replacement and I think his ratings will go way up after Leno does the right thing and retires.

* David Letterman.. wow, what can I say. His shtick got old in about 1988 and yet somehow he has convinced them to draw that circus show out over decades. And now it turns out he is the old man pervert that lives next door. I think he and Leno should both retire and go around and work the nursing home circuit. Late night TV is no longer fun with these two geezers hanging around.